You wanna know who would spend so much time creating a fansite devoted to Kelly Ripa? Well anyone with a lick of sense would!!! But since not everyone is as cool as the Pipaheads that we are, I’ll tell you a few things about her #1 Fan. 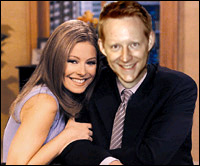 Do your parents love you?

same shirt for school pictures two years in a row. is it too late to notify child welfare?